Hei Tiki Whakaata 2020 showcases a collection of high quality tiki handcrafted by carvers across Aotearoa. This is the second annual showing held at Kura Gallery and will continue to grow as a cornerstone of culture for years to come.

In te Ao Maori, the term tiki is given to carved figures that represent humankind. The largest tribe of the South Island and kaitiaki (guardians) of pounamu, Ngai Tahu, commonly consider tiki to represent the creation of the First Man. It is said that he was formed from clay, stone and earth and given the name Tikiauaha by his creator, Tane Mahuta, God of the Forest and Birds. Tiki produced offspring with Tane’s daughter, Hine-titama who was also formed from earth. There are variations of this story throughout the Pacific, however most prevalent are notions of the joining of Tiki and Hine, the first couple and creators of humankind. The pair interchange as the custodians of Hawaiki (the afterlife) and therefore hei tiki are seen as spiritual connectors of tapu (sacredness). In Maori mythology, Hine-titama fled to the underworld and became Hine-nui-te-Po, the Goddess of Death. She is also known as Hinemataone in the Marquesas, Hineone in Mangareva and Hinapopoia in Rapanui. Tiki was also known throughout Polynesia as Ti’i in the Society Islands and Ki’i in Hawaii. Our Maori traditions can be seen as directly descending from a class of ancient anthropomorphic figures of ‘tiki’ carved from wood or stone and found throughout East Polynesia. In m 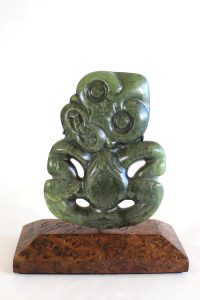 any histories across the Pacific they are known as guardians of the afterlife and representations of Te Aitanga-a-Tiki, the advent of mankind. The persistence of the same concept in Maori tribes shows that the legends were carried to Aotearoa from Central Polynesia during the Great Migration.

Maori hei tiki fashioned from pounamu or bone are unquestionably connected with the creation stories of the original Tiki. Whilst early hei tiki resemble Oceanic figurines, by the seventeenth century they were changing toward the classic Maori form, with symmetrical body and limbs. Some accounts dictate that hei tiki are phallic symbols connected to the virile power of the First Man, other accounts liken the shape of tiki to the human embryo. Notions of the womb are echoed in stories of Hine-nui-te-Po who cares for her children (humankind) once they pass onto Hawaiki and within her realm of the afterlife. Tiki are also connected to the deified moon, which protects the interests of people through the Goddess of Childbirth, Hine-te-iwaiwa. Carved paddles found in the Austral Islands in 1905 detail tiki as birthing women and is recorded as “a confirmation that tiki are the principle of life in human form, complete in him or her self, and might therefore be properly represented as either sex.” 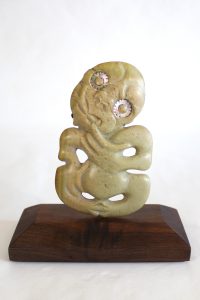 Regardless of the gender narrative, tiki are potent symbols of life connected to virility and fertility. In te Ao Maori, the womb is called te whare taonga (the house of mankind) and is considered sacred; therefore tiki are embued with a potent mana (prestige) that is connected to the life source of humanity. Hei tiki remain highly prized possessions which were carefully treasured and handed down from one generation to another. They were often given as a protection to pregnant women, but worn by both men and women as symbols of the significance of kinship. There are recorded instances of Maori mourning over pounamu tiki if the physical body of the deceased could not be recovered and Tiki were often named and carried through family lines as an immortalisation of certain tipuna (ancestors).

Hei tiki were most likely highly developed stylistically from the outset, with the common style appearing and rising to prominence quickly. The eyes are often inlayed with paua shell or red sealing wax of a European origin. They are traditionally worn with thin leather or plaited lashings but are now more commonly seen with wax chord. 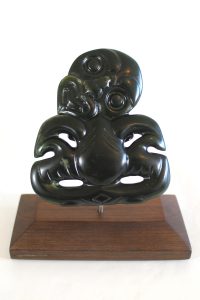 Despite the origin of Tiki being divided among oral records, it has remained an essential symbol of Maori cultural identity that has thrived throughout generations. In it’s contemporary context, hei tiki have become a culturally iconic adornment known throughout Aotearoa and the Pacific.